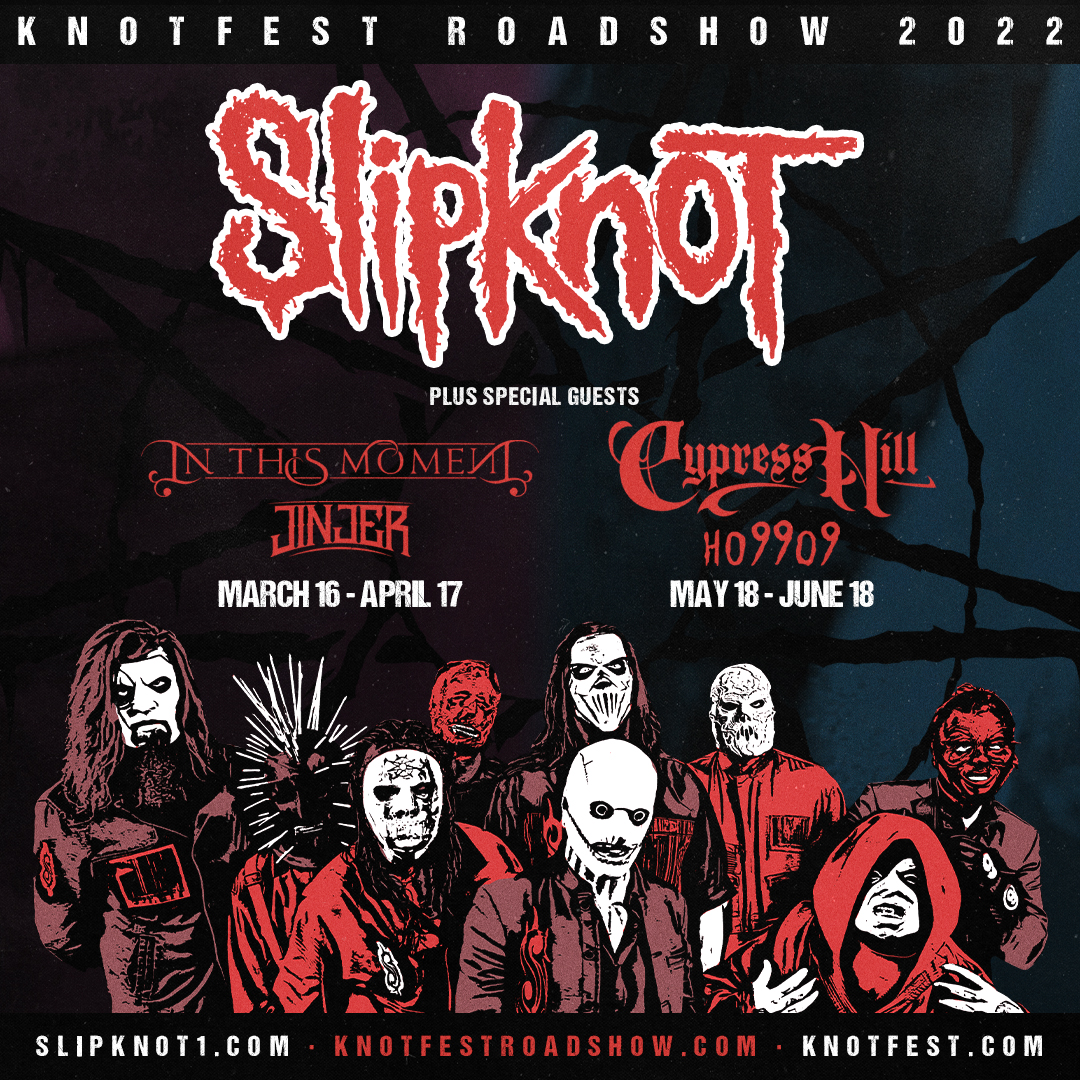 Slipknot, one of the most thrilling and visceral musical collectives on the planet, are excited to announce the 2022 iteration of their infamous Knotfest Roadshow tour. The tour will take place over two legs, both headlined by Slipknot. The first leg will feature special guests In This Moment and Jinjer. The second leg will feature special guests Cypress Hill and Ho99o9. Tickets for all shows go on sale at 10am local time on Friday, January 21st from KnotfestRoadshow.com

Speaking on the new tour announcement, Slipknot’s clown shares “It feels so good to get back out on the road with our Culture. Get ready for a brand new experience. See you soon.”

“Even with everything going on in the world right now, we’re still extremely excited to come back out in the states, with 2 different, exciting packages. Whether it’s In This Moment and Jinjer, or Cypress and Ho99o9, we pride ourselves in bringing our fans the epicenter of our music and art. Come celebrate with us, and try to stay as safe as we will be.”

2021 marked a banner year for Slipknot. Making a triumphant return to the road, their Knotfest Roadshow 2021 tour sold out amphitheaters across the country, bookended with the record-breaking Knotfest Iowa and the biggest headline show of their career, Knotfest Los Angeles at Banc of California Stadium where they debut their first new music in two years – the furious ‘The Chapeltown Rag’ taken from the highly anticipated new Slipknot album, expected to release this year. In addition, they topped the bills of multiple, internationally renowned festivals including Riot Fest, Rocklahoma, Inkcarceration, Welcome To Rockville, and more.

Tickets for all Knotfest Roadshow dates go on sale at 10am local on Friday, January 21st, 2022 from KnotfestRoadshow.com.

The tour will be part of Live Nation’s Live Stubs initiative which provides digital collectible NFT ticket stubs to ticket holders. Live Stubs will automatically be included with tickets purchased for the tour. Fans will also be able to view, share, gift, trade, and resell their live stubs on Livenation.com